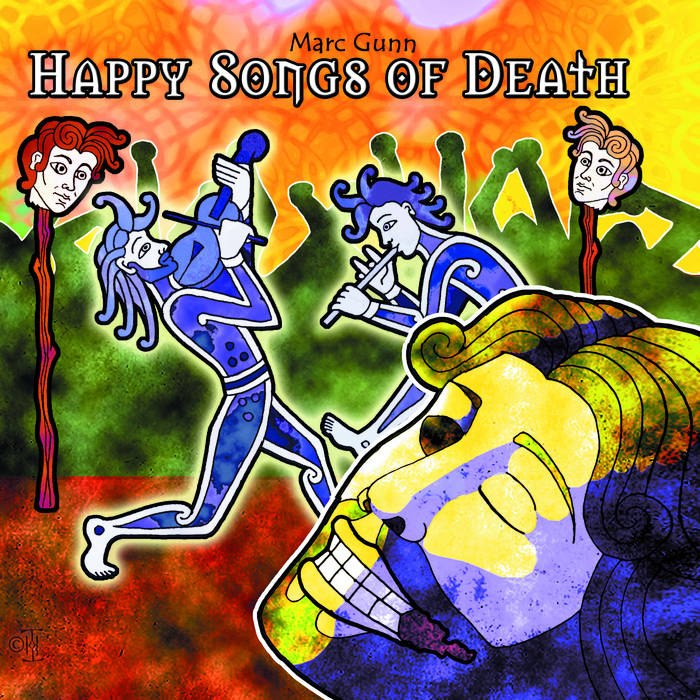 It's Irish. A joyful juxtaposition of the morbid and the comic that celebrates murder ballads, the Black Death and life through death.

"Happy Songs of Death" is a joyful juxtaposition of the morbid and the comic that celebrates murder ballads, the Black Death and starving to death. Celtic songs, American songs - and notably several of Marc Gunn's original compositions all affirm that death is just the other side of life! Artists through the centuries have found inspiration in these same themes. Join Marc Gunn in a fresh look at all things mortal.
"Life does not cease to be funny when people die anymore than it ceases to be serious when people laugh." - G. B. Shaw
This album began many years ago when I was introduced to the music of Italian musician Angelo Branduardi. He had a delightful little song called "La Pulce D'Acqua". One day, I decided to translate it and found out the title meant "the flea of the water". Intriguing, I thought. So I tried translating more and a wild idea came to me. This song was about the Black Death!

In fact, it wasn't, according to some Italian friends who actually understood the meaning of it. I was disappointed by that, but thought it would be cool to write an upbeat song about death. Then while chatting with Andrew McKee, my former bandmate with the Brobdingnagian Bards, the title arose--Happy Songs of Death. It took me four years or so for the album to come about, but here it is.

The songs are an upbeat mix of traditional folk songs and original songs about death. There are murder ballads, people rising from the dead, war, my own song inspired by the Black Death, and a general celebration of the dead.

I was so excited about this album that I had TWO CD covers designed for it. One by Ingrid Houwers who desiged by Irish Drinking Songs for Cat Lovers CDs and the other by Nikki O'Shea who designed my What Color Is Your Dragon? CD and the Bards Comic.